Whether you’re welding in a workshop, sawing in your shed or gluing in your garage, having a bench vice will undoubtedly make the task in hand easier and quicker. A bench vice is a relatively inexpensive, multi-purpose workshop tool, which is a must-have piece of kit for any professional or amateur DIY enthusiast.

A bench vice is often referred to as a tradesman’s “second pair of hands” due to the support and assistance it offers in a range of DIY scenarios, including sawing, sanding, chopping, drilling and finishing. A bench vice is fixed securely to a solid, flat surface (usually a workbench) by a clamp or bolts, and is designed to hold a workpiece firmly, keeping it stable and in a fixed position, with minimal movement and vibration. A bench vice can also be used to stabilise multiple parts of a workpiece to ensure an even finish, for example when planing wood or glueing plastics.

The beauty of a bench vice really is its simplicity – basic, heavy-duty engineering at its best. However, shopping for a bench vice is slightly more, shall we say, demanding!! Size, materials, jaw options, PSI, swivels, different names… How can shopping for such a simple mechanism be this much hard work? The key is to KEEP IT SIMPLE and in this Bench vice Buyers Guide, we’ve done just that.

Only got five minutes

Safely secure workpieces with a durable and dependable bench vice. Whether you’re an established professional or simply a DIY enthusiast, a good bench vice is a must-have piece of kit for your workshop. The best bench vices will be easy to install and steady and secure to use, without marking either your workbench or your workpiece.

The humble bench vice is known by several different names: metalworking vice, engineer’s vice, machinist’s vice, mechanic’s vice and workshop vice. Add this to the fact that some UK retailers insist on using the American English spelling of ‘vise’ and you’re faced with a DIY minefield! Just bear in mind, all the names listed here fall into the ‘bench vice’ category – they’re fundamentally the same as they can all be fixed to a flat surface!

The best bench vices will be made of cast iron, of which there are two types:

The ‘grey’ in grey iron refers to the presence of graphite in the form of ‘flakes’. Grey iron is the most common form of cast iron as it’s highly resistant – not susceptible to rust and heat damage. A disadvantage of grey iron is that it’s not as tough as ductile iron. It doesn’t take impact well, and in extreme cases can fracture – not ideal if you intend on carrying out a lot of heavy-duty hammer work.

Ductile iron, like grey iron, also contains graphite, but the particles are rounded. This difference in particle shape results in ductile iron being considerably stronger than grey iron, and consequently is resistant to cracking.

The size of your vice and the capacity of the jaws will dictate the size of the workpieces you’re able to work with. Jaw width tends to be between 2” and 8”, with 6” jaws being the most common for domestic use. Jaw opening can range from around 4” to 12” depending on the individual model and the slide length. A bench vice will hold workpieces which measure greater than the width of the jaws, but working too far from the area of grip subsequently causes flexing, which in turn affects stability.

The jaws are the part of the bench vice that holds a workpiece secure once tightened and are arguably the most important component. The best bench vices will have sturdy jaws, which, unless you’re going for a budget model, should be interchangeable or at least reversible, with an impressive degree of grip, but which have a protective rubber ‘coating’ to avoid any marks or indentations to the workpiece.

The jaws of a bench vice are parallel to each other – one jaw is stationary and the other jaw moves, to allow you to place a workpiece between the two jaws, and one is then moved in to tighten.  To what degree you want your bench vice jaws to ‘open’ is something you need to be clear on before you buy, as this will determine the size of workpieces compatible with the bench vice you’ve chosen.

If you intend on using your bench vice regularly, and for heavy-duty tasks, then definitely consider a bench vice fitted with replaceable jaws: with excessive use and general wear-and-tear, bench vice jaws can wear down surprisingly quickly.

It’s worth noting than jaw covers – wood, plastic or nylon – are also available. They fit snugly over a bench vice’s existing jaws and offer different gripping applications. This is the best option if you plan on using your vice for a range of materials of various shapes. 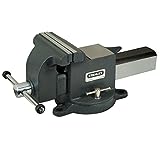 A standard stationary bench vice is great for fixing workpieces in position however if you’re also after flexibility, then a swivel bench vice is what you’re looking for. A swivel base is an incredibly handy feature, which allows you to swivel the workpiece, usually between 180 ̊ to 360 ̊, offering increased flexibility, whilst the workpiece is still fixed in the vice. A swivel base saves time as it eliminates the need for clamping/unclamping the workpiece in order to change its position, and also reduces the risk of damage to the workpiece from repeated tightening.

A bench vice needs to be secure and stable in order for it to be fit for purpose.

There are two types of mounting interface (the part of the bench vice which fixes to the workbench/work surface) to choose from when deciding on the best bench vice for you and your workshop:

A bolt-on mounting interface secures the bench vice to your workbench with typically four bolts; the best bolt-on bench vices will come with the holes predrilled, which saves you a job! A bolt-on bench vice is the better choice if you plan on working with heavy-duty workpieces and/or jobs where you’re going to be putting a lot of pressure of the vice as it’s more stable than the clamp type alternative. It is permanently fixed in respect of once the bolts are screwed into place, the bench vice has its home, whereas a clamped bench-vice can be unscrewed and moved around easily.

Bench vices which are secured to a work surface using a clamp are easier and quicker to install than a bolt type bench vice: they simply require screwing into place to tighten the clamp and they’re ready to use. However, a disadvantage of this is that clamped bench-vices aren’t as secure as bolt-ons and as a result, are better suited to lighter projects.

Though a bench vice is an uncomplicated device – a workshop tool of simple means – there are a few features that make using it even easier! 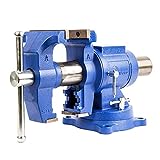 How much does a bench vice cost?

You can pick up a budget bench for under £30 but keep in mind that a tool that ‘s destined for a life of punishment needs to be well cast and made to last – metal fatigue and cracking can occur in poorly cast models. For a mid-range, decent-quality 4”-6” bench vice you’ll be looking at spending between £40 and £80. For professional use, top of the range bench vices cost anywhere between £120 to £200.

What does the PSI rating mean on a bench vice?

You might see a psi rating on a vice (pounds per square inch). It’s the pressure used when casting, and is an indication of the type of iron which has been used. Typically, 30,000 PSI is what you’d expect for a grey cast iron bench vice and 60,000 PSI for a ductile cast iron model.