Scroll saws are used for cutting intricate and precise designs in wood, non-ferrous metals, plastic or laminates. Consisting of an ultra-fine, narrow blade with a variable speed range, this handy cutting tool enables the user to create clean cuts and curves in a range of materials. It’s a piece of crafting kit no amateur or professional creative should be without! 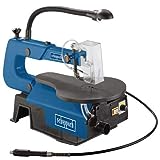 A scroll saw is a power-tool – driven by a motor, usually located at the rear of the machine. The motor has two extending arms which support the blade and, when powered, the scroll saw blade moves up and down at speed. The best scroll saws will be relatively quiet and produce minimal dust, whilst offering more control than a jigsaw and more efficiency than a coping saw. They’re great for creating curves; cutting angles; shaping dovetail joints and crafting complex and convoluted designs.

When it comes to scroll saws, the two main types are:

The blade of a scroll saw is the key cutting component and there are two types of blade available: pinned or pinless.

If you think you may have a use for both pinned and pinless blades, look for a scroll saw that can facilitate both blade types.

As with the majority of DIY power tools, the more you pay the more likely you are to find yourself with an all-singing all-dancing model with numerous extra features, all intended to assist you in producing high-quality cutting work quickly and easily.

When comparing scroll saws, it’s important to look at the additional features and functions on each model and prioritise the ones most relevant to you. For a basic model, you’ll look at paying around the £90 mark with the more powerful models ranging from around £120-£200.

The best scroll saws will feature variable speed settings, measured in SPM (strokes per minute). The speed at which you set your scroll saw will depend on the type of material you’re cutting – for plastic, acrylic or hardwood such as oak or mahogany, you’ll need a scroll saw which is capable of cutting at high speed – around 1200-1800 SPM. For softer wood, such as balsa or white pine, a saw speed of around 400-800 SPM should sufficient. The best scroll saws will offer a broad range of speed settings, allowing the user to achieve clean, precise cuts in a variety of materials.

The thickness of workpiece a scroll saw is able to cut through is referred to as its ‘cut depth’. Most scroll saws have a cut depth of around 50mm (2”) which should be sufficient for the majority of finishing cutting tasks, however high-end, professional models can offer a greater degree of cut. 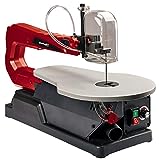 The scroll saw table provides a surface for the workpiece being cut. It needs to be of a decent size, made of a durable material and ideally one which offers the option to tilt (normally anything from 0° up to 45°); the tilting feature will enable the user to carry out bevel edge cuts. Look for a scroll saw table that tilts on both sides as opposed to just one.

When it comes to size, the scroll saw working table should be large enough to support a workpiece in its entirety; when it comes to durability, the best working tables are made from aluminium or cast iron as these are hard-wearing and provide just enough resistance to marginally move the workpiece whilst cutting, but not so much resistance that the accuracy of the cut is affected.

The best scroll saws will undoubtedly come fitted with a dust extraction outlet or dust port. Not only is sawdust messy, it can also pose as a serious health risk to those who are exposed to it in large quantities or on a regular basis –  it’s a known carcinogen (material capable of causing cancer), as well as being a nasty irritant to the eyes, nose and throat. Consequently, you want a scroll saw that comes fitted with an efficient sawdust management system – whether this be a blower hose, dust port or dust collector.

An LED work light means you can use your scroll saw at night, or under low-lighting, but still achieve precise, clean and accurate cuts. It’s a luxury but worth paying a few extra pounds for when the crafting work you’ll be carrying out with your scroll saw is likely to require maximum accuracy with little or no margin for error.

Once you’ve decided on a pinned or pinless blade, make sure you’re clear on the materials you’ll be cutting and the type of cuts you’ll be making as there’s a wide range of both pinless and pin-end blades available, each suited to a specific type of cutting work:

A scroll saw might only be small, but it’s still a saw and is capable of cutting through wood and plastic!! Providing it’s used in accordance with the manufacturer’s guidelines, the risk of injury is low, but there are still a few safety pointers worth keeping in mind: 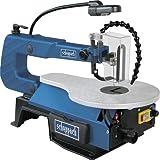 What is the best type of wood to use with a scroll saw?

Plywood (particularly Baltic Birch), cedar and poplar are the best woods to cut with a scroll saw. Poplar is particularly popular as it has a straight, even grain with a consistent texture, meaning the cutting speed can remain constant so you don’t have to worry about stopping and changing the scroll saw blades.

When should I use a scroll saw?

A scroll saw is used for cutting intricate designs in wood, plastic, non-ferrous metal and acrylic. It provides the speed and power of an electric hand saw but produces cuts with the precision and accuracy of a fine handheld blade or craft knife.

In this review, we take a look at the Ryobi Orbital Sander. […] 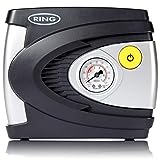 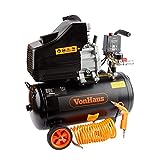