Decided that you are wanting to invest in a hedge trimmer but not sure which to opt for? Your main two choices are going to be a petrol hedge trimmer or an electric hedge trimmer. Both will come with pros and cons and be better suited to different people depending on the jobs that they are planning on completing. We created this article to compare the two options so that you can find the best option for you.

First up let’s take a look at the petrol hedge trimmer, what are the pro’s on con’s of petrol hedge trimmers and why do people rave about them so much! Some people laugh at the thought of using anything less than petrol when it comes to a hedge trimmer, lawnmower or grass strimmer. They believe it is petrol or nothing, but why? What makes them so good and is there really any point in considering electric hedge trimmers?

Positives of a Petrol Hedge Trimmer

A petrol hedge trimmer out of the box is cordless, there is no need to worry about a wire, be that cutting through one or finding a place to plug one in. You have the freedom to work wherever you are and don’t need to be near somewhere with a mains electric supply. This is a big advantage to someone who either has a lot of land and can be often no where near mains electricity or someone who uses hedge trimmers for commercial reasons, such as grounds maintenance.

Another beauty of petrol as your power source for your hedge trimmers is that it isn’t effected by weather, in the UK as we know it rains a lot. If you have a large hedge that requires work regularly and it’s raining a lot you are limited to when you can work on it. With petrol hedge trimmers you can work on it come rain or shine, without the risk of being electrocuted.

Power is a major consideration when it comes to hedge trimming, i’m not referring to a power source, but how much cutting power the hedge trimmer has. Typically if you are trimming a small domestic hedge that doesn’t have thick branches either an electric hedge trimmer or a petrol hedge trimmer will do the job. However, if we are talking about a substantially large hedge with thicker branches, often the electric version just doesn’t cut the mustard.

Again looking at domestic vs commercial application of hedge trimmers, petrol hedge trimmers are a lot more likely to last over pre-longed use. This can include regular use 5 days a week, or cutting for several hours in one go. Electric hedge trimmers coupled with slightly thicker branches can tend to burn their motors out a lot sooner than the petrol counterparts. If you do go for an electric hedge trimmer for more prolonged use a brushless option may help prolong it’s lifespan.

As with anything it’s not quite as cut and dry as petrol hedge trimmers being better than electric hedge trimmers or the other way round. It is down to their application, your needs as the customer and of course your budget.

Firstly, petrol hedge trimmers tend to be much more expensive to purchase than electric hedge trimmers. There are cheap versions that you can pick up, but they don’t tend to do much in the way of providing the power, quality and durability that is the whole point in opting for a petrol hedge trimmer in the first place.

A very well respected petrol hedge trimmers brand is Stihl and for that matter great brand for most petrol garden products, including:

Weight! Whilst hedge trimmers in general can be heavy pieces of kit, petrol powered ones tend to be among the heaviest. If you are using hedge trimmers for your job or a large hedge they are fantastic for the reasons listed above, but you do need to be aware that the weight of the product will take it’s toll on your body. Especially due to the angle you are holding the petrol hedge trimmer away from your body.

NOTE, please be aware that petrol is a flammable substance, please ensure that when you are storing, transfering and incase of spillage of the fuel you are wearing protective clothing, clean it up properly and do not store it in a place where it could come into contact with a spark or something that could ignite a fire.

So, we have just discussed why petrol hedge trimmers are so amazing, powerful and great for many applications, where does an electric hedge trimmer fit into the mix, what are the positives and negatives and is it really such a clear cut decision?

Positives of an Electric Hedge Trimmer

Electric hedge trimmers in times gone by was a nightmare! They were dangerous thanks to the cable that is typically run across the path of where you are cutting. There is trip hazard that you generate for yourself and others as you have a cable typically running a great distance, sometimes on a pavement or drive way. As discussed above an electric hedge trimmer is really only safe to use in fine weather and they didn’t really have the pulling power of their petrol cousins.

In steps cordless, when cordless power tools first hit the market, in the form of drills and garden tools people were wary and rightly so. They didn’t give anywhere near the same amount of power, the power would drop towards the end of the batteries life and they were more of a toy or gimmick than a serious power tool. With the advent of Lithium ION batteries all of that changed. We are now seeing batteries that not only provide more power and last longer, they can also deliver 100% of the energy right until the battery is empty. This is a huge game changer with regard to hedge trimmers as we now have a viable alternative to petrol hedge trimmers without the need for a cord.

Electric hedge trimmers are usually a lighter weight version than the petrol counterpart and can be manoeuvred and managed much more easily. This is something that I feel is important if we are talking about an elderly person in their home looking to keep their hedges in shape or someone who has back or joint pain.

Negatives of an Electric Hedge Trimmer

There are some negatives though even we you opt for cordless electric hedge trimmers. The first as discussed before is power, they seem to be lacking in power when it comes to comparing them to petrol hedge trimmers. However, an excellent alternative is the VonHaus Hedge Trimmer that pack plenty of punch for its size:

If you are a tradesman wanting to use your hedge trimmer for commercial applications where you would be using the hedge trimmer likely all day long you would run into difficulty using electric hedge trimmers. The issue is that you would need to have literally 10-20 batteries ready for use, probably opting for high capacity 5ah batteries too. This would be not only expensive but time consuming and easy to forget to keep charging them between jobs.

The negative to the batteries if you are a home user who has a lot of hedges to trim or needs to spend a while on cutting one hedge, is that you will likely run out of charge part way through the job. This will mean a period where you have to wait for the batteries to charge back up again rather than just refilling petrol hedge trimmers with more fuel.

We have reviewed in detail the ​Gtech HT20 cordless electric hedge trimmer before. This is an incredible hedge trimmer with power, a good balance of weight, easy to use and works really well. If you are going for one of the cordless hedge trimmers this is certainly one to consider!

Another great option which we have reviewed in the VonHaus Telescopic Hedge Trimmer. This is a great hedge trimmer that offers an extending, telescopic handle so that you are going to be able to work with longer branches and hedges with ease.

Will hedge trimmers cut through branches?

Whether you opt for a petrol hedge trimmer or an electric hedge trimmer, they are both best suited for trimming hedges and branches that are smaller than 3/4 of an inch. Some can be used on thicker branches but this tends to be the more professional sized models.

It doesn’t matter if you have smaller shrubs and hedges in your garden or large trees – a chainsaw is going to allow you to trim and prune hedges and branches, or even completely cut […] 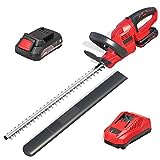 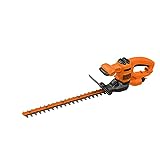 Buyers Guides
Mouse traps can be controversial – no one wants them in their home but equally not many people feel comfortable with killing them either! One thing that cannot be denied is that it is never [...]

Best Wood Wax and Wax Polishes for You – 2022 Expert Guide

Cleaning Tools
We would be willing to bet that every home has at least one piece of wooden furniture! It may be that this is something as small as a bedside table or as large as a [...]
Buyers Guides

If cats are causing a problem in your outdoor space then we have no doubt that you will be desperate to do something about it! Even if you are a cat lover, having others cats [...]
Buyers Guides

Cleaning your decking is essential not only to keep it looking its best but also to keep it well maintained. Clean decking can massively improve the overall appearance of your home, turning your outdoor area [...]
Buyers Guides

All You Need To Know About Bulb Planters 2022

If, like us, you dread the time of year when you need to start planting bulbs then we are here to help! There is nothing nicer than seeing the effort of your labours when plants [...]